This story was written as a field report for the DUO company website
http://duo-inc.co.jp/en/fieldreport/world/
ONE FINE FISH : SNAKEHEAD HUNT
While on vacation I had the chance to sneak off for a day to sample some Snakehead angling in Northern Thailand. For those who are familiar, the local fisheries at home have been desimated by unscrupulous netting, trapping and set-lining, even in protected areas. The chance to uncover a fledging new area was too hard to pass. One had to pounce at the chance.

The Giant Snakehead is just that. It is the largest-growing of the amtospheric-breathing Snakehead species. Its aggressive nature when young mean most never make it to adulthood. The ones that do are learned individuals and present a great challenge to lure fishermen. Highly explosive when going after a lure, the Giant Snakehead is an addictive target and many go through great lengths and cover many kilometres to wrestle with one.

Here is where I come in, couple of thousand kilometres from home and a couple hundred more to go. We set off at 3am, with boat in tow and two enthusiastic hosts in command. The plan was a 2 hour drive to escape the city crowd and fish a reservoir 120kms away. 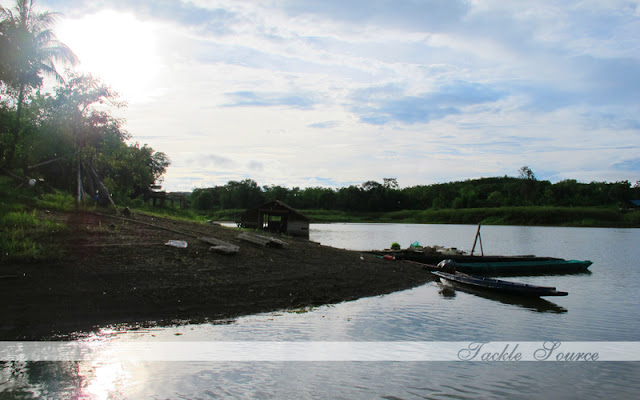 We hit the water as planned, before the sun rose. Negotiating the rocky strewn sections in the dark was a failed attempt as the aluminium hull and outboard took a few heavy thumps. As we motored into position and the sun peaked through the horizon, it revealed a beautiful sight. The clouds hugged the surrounding mountains and the mist hung just above the still water. Gear in check, the casting began.

Towards shallow banks and weedy snags lures flew. We peppered the likely spots with a combination of noisy propbaits, snakey pencils, loud poppers and diving cranks for nary a hit. A few responses from small fish were all we got but they weren't big enough to get pinned.

Freshwater fishing in the tropics is at its best at dawn and dusk, so as the morning wore on the chance of a good fish, or any fish at that, was dwindling. We tried smaller lures for the Jungle Perch that were exploding on baitfish sporadically but that didn't work either. The fish were simply shut off, and it started to feel much like fishing at home. Maximum effort, minimum returns. At least the scenery pleased the soul and when a storm moved in at lunchtime, sending us for shelter, I resigned to the fact and calmed the comiserations with the age-old adage that a day fishing was better than any working.

Forward two hours and the pelting eased into a drizzle. My stressed hosts suggested we hit the water again. I was almost reluctant, but the chance of a good post-rain bite kept the optimism. Rain is everything in the tropics, and the key reason for our dismal result thus far was the lack of it, for weeks. The reservoir was a good 15 feet below it's highest marks, exposing gravel banks and such. The heavy skies and impending rain signaled the arrival of the rainy season, and I was a couple days too early.

I had in my box a complete selection of Snakehead baits to cover all applications, and I had put every single one on by the afternoon. Nothing worked. I had a spanking new Dobyns Coalition Series baitcast rod and it shone in all areas but its fish-fighting ability had yet to be revealed. As we rounded a bend to reveal a heavily vegetated cove, we saw the tell-tale sprinkling on the surface that can only be created by schooling Snakehead babies. There were three pods!

Snakehead pairs would defend their precious brood unconditionally after mating. Their young make easy prey for fast predators like Jungle Perch, so the parents do all they can to ensure their young make it to a decent size before the pod is disbanded.

As the electric motor inched us forward we sussed out the three pods of babies. For sure they would be guarded by angry parents. Now under normal circumstances we wouldn't pursue parental fish, as they lack fight due to starvation during the time of brooding. And also so they can go about with their parental duties undisturbed, ensuring future stocks. But this was a bleak day and with the session drawing to an end we decided to just get one for the camera.

Instantly, we identified differing sizes of the babies from the three pods, and judging by the frequencies of them rising for air we could work out which ones had guardians and which probably didn't. We knew for sure the smallest pod had protective parents keeping a tight watch. The trick with parental Giant Snakehead was that you had to present a lure which posed a threat to their young, this would prompt an attack triggered by instinct.

Couple of casts in with a big swimbait drew a blank. This guardian definitely knew real from fake, and kept her emotions in check as we continued to pepper it with different lure types. She made a getaway with kids in tow, rising ever so far from where we were. Giving chase, we were soon a few hundred metres from where we started, and getting nowhere. We gave up and decided to go back to the other two pods. Upon closer inspection we deduced that these fish were unguarded, as displayed by their youthful nonchalance.

It was off to the adjacent cove in search of greener pastures, which of course weren't so. However on the way back out, while drifting along waiting for likely rises to cast at, I spotted the faint tell-tale ripples in a distant shallow patch. I had on the new DUO Realis Crank M65 so it was sent flying in that direction only to fall a couple of feet short. Quick cranking had the lure back at the rod tip and few patient seconds saw the boat drifting into range. The fries rose again, and the Crank was sent on its way. This time it hit the mark, three feet beyond the pod. Couple of cranks set a course for it to bust right through the school, and as it did the rod buckled. Hook up!

It was over in a matter of seconds, the heavy set up for snaggy terrain made short work of it in this open water. A few short bursts summarized the fight and the fish made it into the landing net with little drama. My hosts, who by now were close to pulling out their hairs, heaved a great sigh of relief. Their job had been done. 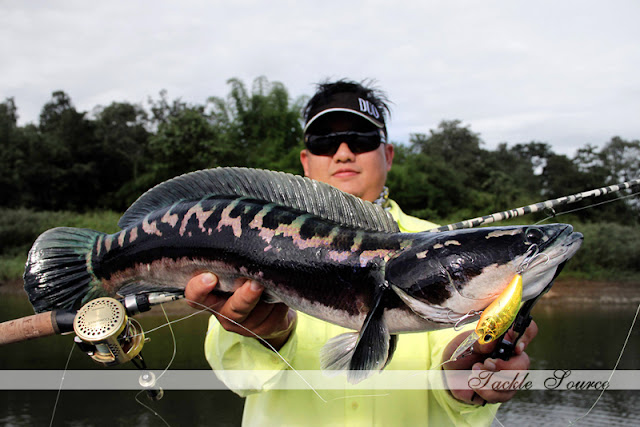 Not a big fish by brooder standards but a good fish no doubt, given the conditions. For me it was a bonus to an already fascinating day. The DUO Crank sat pinned on the side of it's mouth, its chart/gold flanks gleaming in the sun. Yes! I swear it winked at me. 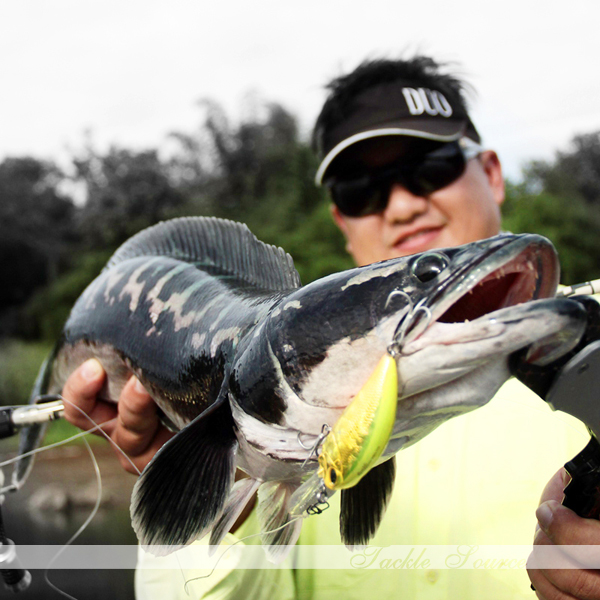 A few quick photos later, the angry fish was sent back to her kids to ensure their safe passage into adulthood. The articulate brooding patterns on her back stood out even against the dirty green of the water as she slowly slipped from view.

I sat back and took it easy as the day drew to an end with an impending storm brewing. We packed our gear and tethered the boat on the trailer for the long trek back, each of us totally spent.

What adversity, what circumstance, and what a challenge this day turned out to be. I wouldn't have it any other way. 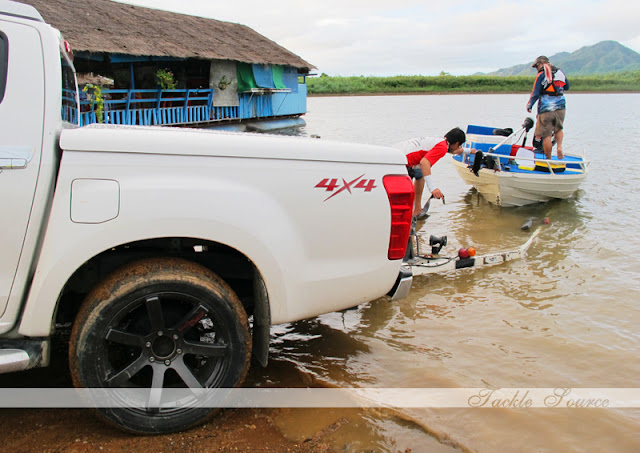 For enquiries please email
tacklesource@live.com﻿
Posted by tacklesource at 9:40 PM