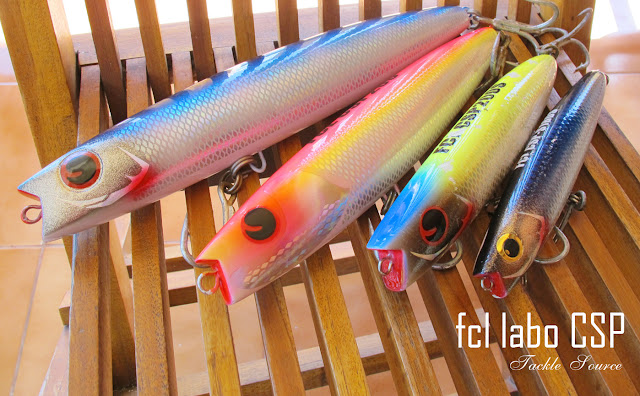 These are just some of the known species of fish that have fallen victim to the FCL Labo CSP stickbait. It is an amazing array, and it pays credit to a revolutionary creation that has altered our understanding of the diving surface pencil.

Above all, it is the ease of use that has led to its success. It can be frustratingly difficult to work a diving stickbait properly. Many are led to believe they do it right but until they see a master at work with the right technique do they realise the shortfall. Stickbaits do require a deft hand, and a tinge of finesse. Changeable conditions and rocking boats only help to turn the difficulty level up a notch.

The CSP has been the answer to these problems and those who have cast one have never looked back. Forget about 'stickbait-specific' soft-tip rods that are so essential to working a normal stickbait properly, the CSP was made for ease of use. Like most FCL Labo products it is made for the everyday fisherman and with it, everyone's a master stickbait manipulator.

The secret? One can't help but notice it just may be the proprietry lip design. But it is much more too, with balance and hydrodynamics being just as important factors to achieve a great design. The trick is to get the concaved lip to catch water as you sweep the rod downwards, as it does the lure dives with a spit of water and slides left right left with a shimmey before popping back up and breaking the surface head first. It is an action to be experienced first hand, and will leave you no doubt about its panic bait-replicating abilities.

That was for the original Floating model. With much persuasion, Tackle Source was able to get mr.Tsurusaki to develop a Sinking model specifically for our Maldivian expeditions. That led to the release of the CSP200S and it subsequently opened up to a whole new array of sizes and models.

Today the model range spans from a 30g miniature to a 300g behemoth and the best part is, the development never stops! Based on feedback and more on-the-water testing, new ones keep popping up and existing models are subject to updates and tweaking to aid the angler in his pursuit. Typical for this brand that never sleeps. It would be mad to list every single CSP incarnation, but basically apart from the original shape in Floating and Sinking models, there is the Slim series with a smaller silhouette, and the short and dense 175 which was tailored for long trajectory but with a smaller profile - perfect for heavily fished locales.

The Sinking models react to any rod input, and thus are the easier to manipulate netween the two. They can be jerked fast, swepted long, walked subsurface or just wound and twitched intermittently. They are impervious to the sea-state and as such makes them the go-to lure for any conditions, truly a fisherman's friend!

The FCL Labo CSP - like all others in the stable - is made from injection moulded high density foam. This material allows for a more economical production which is passed down to the end-user. FCL Labo lures are amongst the most economical Japanese lures in the markets, but even so, no detail is spared in the finishing process. They boast specially cut holographic scale patterns and a proprietry special paint dust which is only used on the cheek of the lure. This gives it a super life-like shimmer and no other lure maker uses it because it is simply too expensive to buy. All models are built around a wire-through body frame which ensures maximum strength and durability, the main issue for many hand-made GT lures. The clear coat used to finish off these lures are also second to none, after initial niggles the FCL Labo lures of today are all built to go the distance.

The CSP truly has changed the way we use stickbaits, we think it will for you too!

For enquiries please email
tacklesource@live.com
Posted by tacklesource at 11:38 PM