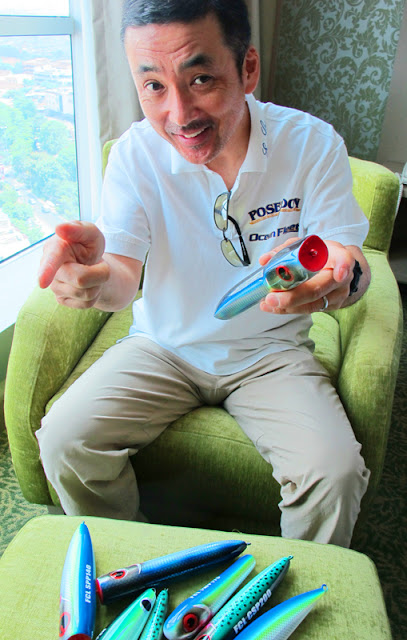 Not long ago we conducted an interview with FCL LABO owner & creator Mr. Yoshitaka Tsurusaki on behalf of local magazine Fish On! for an article. It gave great insight on the mind of the clever fisherman and there's definitely a tip or two to be picked up. Here it is for those who missed it...


How long have you been in the fishing tackle industry?
I’ve been in this industry for almost 30 years, since the age of 20 and starting out with the Yo-zuri company.

Which fishing tackle company were you working with prior to setting up FCL Labo?
I was with Yo-zuri for seven and a half years working in product development as a lure designer, eventually heading the department. In 1989 I started my own company and named it Atelier GL, producing lures and jigs. I was also contracted as a designer/developer of rods for the Saurus brand.

Atelier GL was sold in 1995 and I moved on to new ventures. From 2001 I have been active in the development of lures, jigs and rods for the Evergreen brand, a large and long-standing company in the Japanese market.

When was FCL Labo set up?
FCL Labo, a company I am active in running till today, was set up after I sold Atelier GL in 1995. The first ever product released was a radically new concept ‘short jig rod’, followed by an 11 foot seabass rockshore rod.

Only in the year 2000 did I start developing lures and jigs. The first to be produced in numbers was a long jig.

Big game popping and jigging is a very niche market. What made you decide to venture into this market? / What motivated you to set up FCL Labo?
I love big game saltwater fishing, easy! But I am essentially a keen angler who loves his artificial lures. I fish a lot for trout in the mountains and cast for barramundi in places like Australia too.

In every form of fishing that I do, I strive to find the best way to fool the chosen quarry, thus I design based on a brief that contains information gathered on the particular species. It’s very much like solving a puzzle.

Apart from this I also want to provide alternatives to lures that are already in the market. It is easy to just copy and tweak proven designs and call it your own, but it is not my cup of tea. I am always searching for alternative answers to prove there isn’t just one way to fool a fish.

What do you think sets FCL Labo lures apart from the other big game lures?
Simple. If there’s anything similar market, I wouldn’t be selling it. I like to think of our company and our clients as‘Fishing Dreamers’ in that we always thinking up new ways to catch fish. In short, we are different.

How would you test your lures for quality assurance? (e.g. Lab tests? Field tests?) What are the parameters to test for? (e.g. durability? balance? casting distance? action?)
The easiest way I can think of evaluating a new design is to just go fishing! There is no better way. But seriously there are other areas of concern apart from fish-catching ability too, and for those we work hard in the laboratory to ensure that quality, durability and finish are up to scratch.

Another area we are very proud of is that we have many field testers around the world who fish hard and provide valuable feedback to improve our designs. I think this sets us apart from many other Japanese manufacturers – the fact that we are able to cater to differing species, conditions etc learnt from working with partners. The result is in the many new products that we have produced for individual markets around the world.

In terms of fighting ability, which fish specie would be your favourite?
It would be hard to say any fish would fight harder than the GT (Giant Trevally) but personally, I have much respect for the Amberjack too.

In your personal opinion, when is a good time to use a pencil bait and when to use a popper for GT?
When I first brought the concept of popping to Japan from what I had seen in Australia, the concept was very different. The idea was to use a popper to startle schools of fusiliers (baitfish) which in turn drew attention from passing GTs and inducing a hit.

Eventually, back in Japan the idea was refined and chuggers were developed to bring fish up to the surface from the deep. Pencil baits were eventually introduced for shallow water work and for places with big currents.

My concept of creating a lure for GT is based on three key understandings of how a GT feeds. These predators use their hearing, sight and lateral line and so our lures are designed to ignite these senses. Of course these are only the basics. The products are what you might call a culmination of years of hunting these fish, on the water experience and a deeper understanding of this adversary. I have tried to encapsulate the action of nature in my lures and have gone so far as to have studied how an airborne flying fish re-enters the water for example.

At the end I feel the popper is still the best tool for GTs – the anticipation, strike and ability to stir up emotions make it second to none!

What are the key factors in designing FCL Labo jigs (e.g. angle, balance, finishing, sink rate, etc)?
The number one factor is what I like to call‘jerk feel’ – you have to feel it working through your actions. A jig, though, is more than a jerking tool. It has to combine two factors – the pull and the fall. What I am saying is that the fall is just as important as the jerk, and to me ‘fall speed’ is very crucial when we are testing a new jig. So essentially a jig has to work on the way up and down, and in between jerks where ‘hang time’ is a critical chance for a fish to pounce.

Personally I feel that action is definitely more important than the finishing of a jig, though in some areas like very deep water, glow properties will enhance the jig’s ability to catch fish.

Do you see a big potential for FCL Labo’s growth and presence in the Southeast Asia market?
I am positive about it. At the moment we cater for the world’s market and this market is no different. We will specialize products to meet demands for each.

Light jigging & micro jigging has become very popular in recent years especially in Southeast Asia. Does FCL Labo have any plans to extend its range of lures to cater to the light coastal and shore jigging market?
In fact we have existing jigs and lures in our range already. Jigs like the CS 35gm, 45gm and SL 60gm have been accounting for many catches around your area. Light tackle fishing has always been close to my heart and I am a big fan. Through the years we have developed jigs like the SL and CS down to even 8gm but we are not stopping there.


Fishing is all about the fun factor and light tackle brings out more for the angler. Our philosophy has always been to create new ideas for greater joy in this sport. 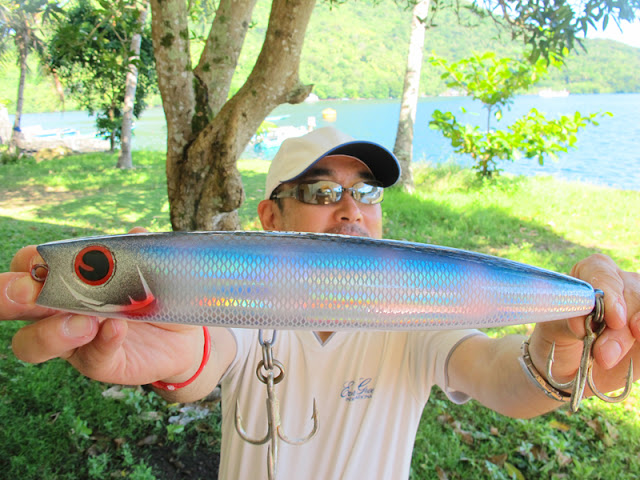 For enquiries please email
tacklesource@live.com﻿
Posted by tacklesource at 1:12 AM