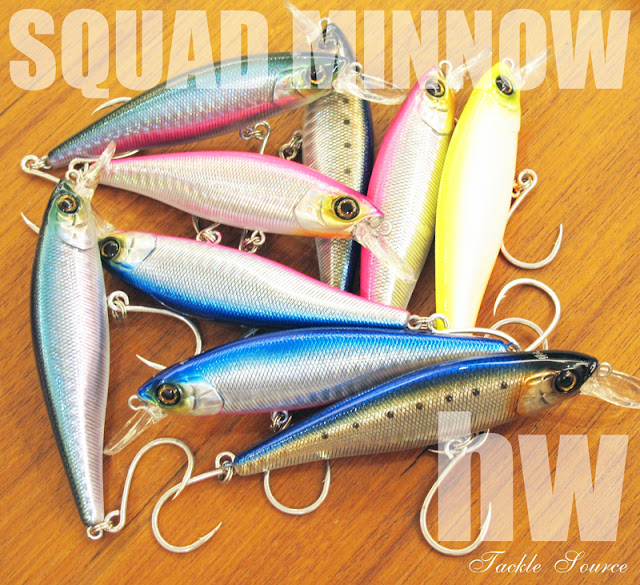 Jackall ﻿Bros is generally known for their extensive and successful range of freshwater lures but that doesn't stop it from making an impact in the salt with this very effective lure.
With the Dangan Squad Minnow, the guys have taken their highly regarded shallow jerkbait, the Squad Minnow, and added weight. Far from just a simple excercise, the entire lure had to be re-engineered to accomodate the extra ballast and yet retain the magical action. The Squad Minnow is a mainstay in the freshwater Bass market, and a benchmark of sorts. If the same effectiveness can be carried over into the salt, the results would be phenomenal. And carry it off they did.
The HW (heavy weight) Dangan Squad Minnows come in three sizes mirroring their original cousins in size. They cover most applications with weights ranging from 11g to 19g to 25g, and there are six saltwater-biased colours for anglers to choose from.
At first look they may not seem like much but once tied on and cast out the world unfurls. Allowed to sink, it will cover all water columns and they can be worked with varying degrees of speed and manipulation. Most importantly, no other heavy weighted lure comes close to its strong and tight shimmey when cranked. As such, the Dangan Squad Minnows can be very deadly when straight cranked. It will take a whole host of speeds and when twitched it exudes that perfect baitfish panic dart. The finishing on these lures are top-notch and colours replicate most typical baitfish anywhere in the world. They are hard-wearing and will take alot of abuse from toothy predators without loosing much paint.
Many use the Dangan Squad Minnow in smaller guises for freshwater fishing in deep dams and fast flowing rivers for Jungle Perch. Its heavy weight and stable swimming action bode well for these locales. All will do well in the saltwater whether from shore or boat. The versatility is truly appreciated especially by shore casters who are able to cast wide and sink deep in their search of fish. They are particularly effective for reef bashing for shallow water pelagics or structure hugging demersals. When ripped and paused they can hug the bottom throughout the entire retrieve, covering much more of the strike zone than most lures.
The original trebles, although saltwater-strong, will have to be changed for our tropical lure-munchers. With its svelte silhouette the use single hooks create the right balance and strength when targetting hard running fish. Hook ups are generally unimpeded as the hook point exposure is excellent, so even with single hooks the rate of conversion is high.
With the saltwater scene in full swing its the right time to bring out the Dangan Squad Minnows for a soak!
For enquiries please email
tacklesource@live.com
﻿
Posted by tacklesource at 11:39 PM