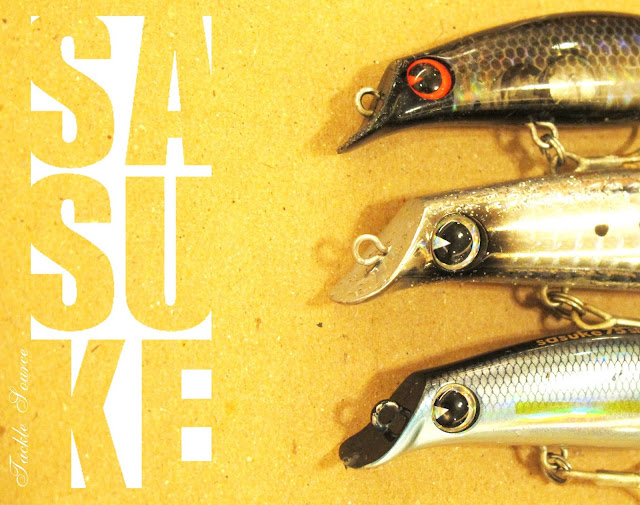 The IMA company leads the industry in Seabass lures in Japan, and the Sasuke is it's pride. It is everything a Suzuki lure needs to be, and more. IMA shot to fame when it released the Komomo way over a decade ago, that lure became a must-have in every decerning Seabass fisherman's box, and still is today. The Sasuke was developed following the success of the Komomo and has taken the game further.

The Sasuke sports a slightly shapelier integrated lip which catches more water. It gives the lure greater depth, wider swimming action and crazier darting. The very first one was introduced in 2001 and over ten years later we are still seeing new versions created. The platform on which the design is based is highly versatile. It is also noteworthy of the hundreds of copies or 'modified' designs that have spawned from the competition ever since the Sasuke took Japan by storm.

In the IMA line-up at present there are 6 versions of the Sasuke, not counting the different states of tweak and the array of special editions that are launched ever so often. Seabass lures are notoriously devoid of strong, tight swimming action, especially those made to mimic the spawning sea worms that attract these fish. When used as intended, the Sasuke will swim with a slow roll and a wide wobble. That is with a slow constant straight retrieve. However, in our neck of the woods most fish get turned on by speed, darts and jerks. Many would turn their noses up at slow offerings.

Well, the Sasuke has one thing up its sleeve. It goes mad when twitched! And thus has become a favourite for many tropical anglers targeting a myriad of species. It also shows its versatility when cranked fast and hard, with or without the interspersed jerks. Fish can't seem to get enough.

The range now boasts a collection ranging from 95mm to 140mm in size, with a spin-off in the shape of the shorter and stockier Shad 75. Some versions are made to float and some to sink while others both. Short of a really tiny version, the Sasuke range has it all covered.

For saltwater fanatics its no doubt the focus will be on the 120, 140 and the new 130 range. The 120 and 140 has become THE lure for Barramundi in our waters for some time now, a place on the pedestal it doesn't seem to be relinquishing anytime soon. It is the simplest, most original form of the design. Slim, taut and pure, it boasts superb distance when cast and produces a flash second to none when worked. The new 130 is designed with a larger surface area coupled with a heavier weight of 25g. It is made for big fish. The action much stronger, the casting further and the overall presence just shouts 'easy prey'! These big guys have accounted for thousands of Barra captures over the years and will continue to do so. Beyond Barra it makes a great lure for casting over reefs for Trevally and Cod/Trout. They also have found favour with freshwater anglers seeking distance and stealth when chasing Giant Snakehead and big Peacock Bass. And while the Trevallies and Snakeheads are mad for the high speed jerks, the approach with Barra and the other saltwater estuarine species is one with slow to medium cranks, intermitent jerks and lots of pauses in between.

The Sasuke 95 and 105 make for great freshwater weapons. Peacock Bass can't say no to a rapid-jerked Sasuke and neither would a switched on Jungle Perch. These lures are great for light saltwater application and especially in sinking trim is deadly for prospecting large areas. Like all others they cast great with light-medium outfits and work best with some speed and plenty of twitching. This lure is one great addition to any tackle box.

The baby of the family is the Shad 75. Like its name suggests, it has a deeper bodied profile and is proportionately shorter than its brothers. The Shad 75 thus has a slightly different repertoire. Slow sinking, it can be fished in multiple water columns and don't count out a bite on the drop as it exudes a slight flutter. This makes it deadly on the more passive freshwater species like the introduced Pacu. When retrieved with a constant crank it has a wide action and is great for many fresh and saltwater species. However, when called upon for more action it can be twitched and jerked like the best of them.

All Sasukes come equiped with saltwater grade chemically sharpened trebles that take some abuse. Anglers looking for more strength can opt for beefier trebles but too much weight does compromise the action somewhat so a balance has to be struck. These lures are cleverly weighted to excel in casting and most anglers will find them a joy to work with either with spin or baitcast outfits. Their relatively slim profile ensures good hook exposure so they hardly miss their mark. All in, there are no downsides to these lures. One can't even get bored of them as special and limited colours are released seasonally to keep anglers and fishes intrigued.

Here's a lure thats stood the test of time and will do so for a long time to come.


Posted by tacklesource at 4:09 AM