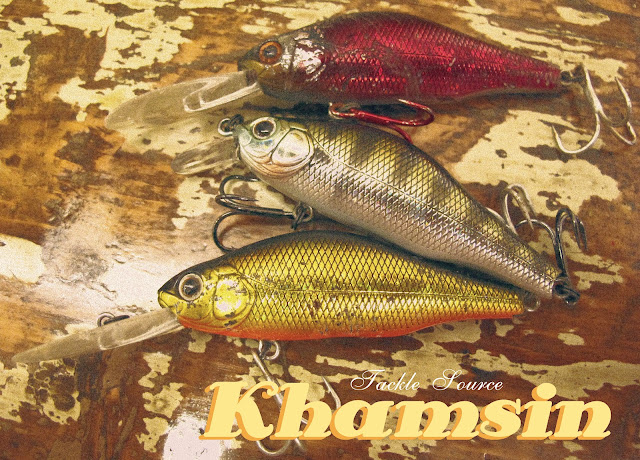 Now this is a pretty special lure. Not to say the others aren't. But within the company of greatness some still manage to shine, and this is one!
The Zipbaits brand of lures are well-known for their saltwater shore casting lures, predominantly for Seabass or Suzuki in the Japanese domestic market. Their lures are acclaimed distance champs when it comes to casting, it seems they have perfected the art of internal weight transfer systems. Zipbaits characteristically produce a loud clack when cast hard, something which often startles the first time user.
The company does produce lures to cater to other markets as well, and they are particularly successful with their range of Trout lures that boasts a collection that varies from wild stream to stocked pond fishing. Least represented within the stable would have to be their Largemouth Bass range of lures, but even so there are a selected few which have proven to be great producers for many anglers locally.
At first glance the Khamsin looks refreshingly like many of the bait species we have in South East Asia. Deep bodied lures are harder to come by for whatever reason, but they seem to work better at representing prey like Tilapia or any of the Barb species. Also, deep profiles provide maximum visual presence side-on and its greater surface area always means more flash. Originally made to mimic the freshwater Shad in more temperate climates, this lure proves it fits in perfectly for the tropics too.
The Khamsin comes in SR (shallow runner) and DR (deep runner) iterations and is available in 3 sizes. Somehow, these are secondary. Tie on a Khamsin in any form and within moments its super natural action will mesmerize you first.
I kid you not.
If you find yourself repeatedly swimming it within rod-tip's length astounded by the swimming action it would be perfectly normal! This lure has a place in many tackle boxes as the go-to lure for many since inception, and why not? It casts very well for what it is, it can be worked with a do-nothing retrieve at all speeds and we haven't even gotten to the twitching yet! And what a twitch! Especially on the Shallow Runner model. This lure defines the genre.
The original Khamsin is a 70mm model. At this size it is perfect for light to medium application with baitcast or spin tackle. Many see it as a freshwater must-have for the likes of Peacock Bass, Jungle Perch or any of the Snakehead species. But used in the salt it has proven just as effective with many species including the highly prized Barramundi among others. All Khamsins come equipped with the usual inadequate high carbon hooks like most Japanese freshwater lures do. Into the bin these go once out of the packing, to be replaced with some slightly stronger ones to stand up against the tougher fish we have in our waters. As a consequence, heavier hooks do mean a slight dulling of the fantastic action but the lure copes well and is neccessary evil anyhow. Just be sure not to get over-enthusiastic on the hook size.
With their proprietry Mag-Drive internal weight transfer system these lures are well balanced even with the superior castability. They are all made to Suspend, just to add to its effectiveness. So like all good lures, the pause is usually the ticket to bite for any predator.
Coming down in size, there is the Khamsin Jr. Identical to its larger sibling, only shrunk to a 50mm frame. It does everything the bigger Khamsin does, and provides an alternative for when the fish shut down or shy away from more intrusive bigger lures. This model is a killer in the salt too, for ultralight prospecting in tight spaces.
The baby of the family is the latest introduction - the Tiny Khamsin. Launched in 2011, this lure has taken the Bass and Bream market by storm. At 40mm it opens up to a whole new species list. Finesse fishing for fish like finicky Bream has never looked the same. In the local scene, high-pressured fisheries like stocked ponds and catch & release facilities are now tackled with re-newed confidence. The ultra-light fraternity got a shot in the arm with the Tiny Khamsin. One tip for fooling these smartened adversaries, try an ultra-slow retrieve, slower than anything the brain has calibrated. Leave plenty of hangtime interspersed with the very infrequent flick of the wrist to impart that faint tickle. The subtleness cannot be overstated, and having the right slow action rod is essential. Try it, it might just be the key to better fishing.
The world is a better place because we have the Zipbaits Khamsin.
For enquiries please email
tacklesource@live.com
﻿
Posted by tacklesource at 11:43 PM