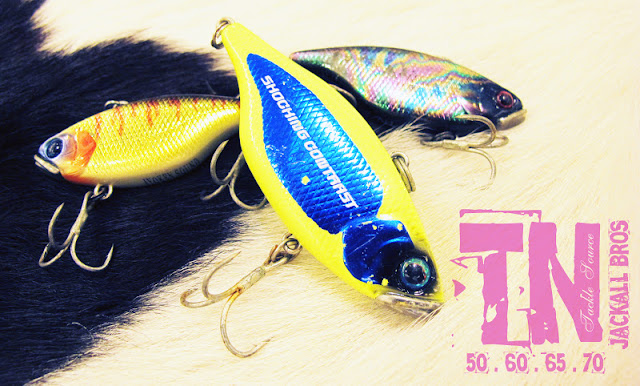 Jackall Bros has been at the forefront of lure fishing in Japan for some time now, and probably the product they've sold the most of would be the TN series of vibration lures. This lure, when launched, changed the landscape of what could be achieved by a vibe.
The TN has now spawned into a range represented by 4 sizes and many different rattle options, but it all started when creator Seiji Kato introduced to the world a vibration lure with a tungsten weight moulded into the shape of lips and placed at the leading edge of the lure. This allowed the nose-heavy lure to sink and sit on its head, and when retrieved, to adopt a head-down stance that crucially minimises the constant snagging that had plagued vibration lures.
Typical of traditional vibration lures, the original specification TN was equipped with loud rattles. Vibration lures, after all, were brash, fast moving contraptions which were meant to have large calling power. However, over time the design has been honed to include different sound options. The loud original TN is now joined by a Silent model, the lower pitch sounding Iyoken Sound, the distinct sounding Full Tungsten and the loud Skull Sound created by the 'bone' high density plastic in which it is moulded in. That makes 16 different iterations divided into 50mm, 60mm, 65mm and 70mm sizes.

We constantly have trouble procuring TNs as demand outweighs supply, this phenomenon created by the success it has garnered mainly in the American market where it is without doubt numero uno for Largemouth Bass and in others like Australia as well where they have proven to be the lure for freshwater Aussie Bass.

Here in the tropics the TN vibes have garnered a reputation as a great producer in the freshwater arena. The catches astound and nothing seems to escape its path. Used with a do-nothing retrieve, ripped fast or with a lift-and-fall technique, the lure runs true with much stability. It is this versatility that has seen to its success. Typically, the lure is allowed to sink to the desired depth before retrieved. This allows it to cover various water columns effectively. It is deadly on the introduced Peacock Bass species along with its close cichlid cousins, worked with relative pace. With a slower approach they prove just as successful with the many catfish species and with snakeheads as well. Anglers have found it to be a particularly effective lure for Jungle Perch or Sebarau, especially in low-light conditions or even at night.

Not to be outdone in the saltwater, it has accounted for quite a myriad of species by anglers who have seen its effectiveness. Best used for scouring the lower column of water for bottom hugging species, it has proved itself on Snapper, Groupers and the like, even Barramundi!

If you're not already a believer, you don't know what you've been missing.


For enquiries please email
tacklesource@live.com
﻿
Posted by tacklesource at 7:47 PM