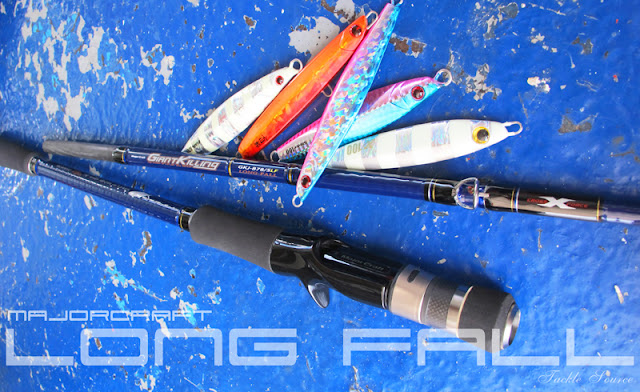 Overly long, unwieldy and cumbersome.
First words that come to mind when you pick one up. The Giant Killing Long Fall is a curious thing, as far as jig rods are concerned. First thing one notices is the extreme length. Seven foot eight inches for a jig rod? There's a reason for this. And how it has caught on in its native Japan. We've been fishing this style for some time and its effectiveness is to be believed.
Originally conceived as an extension of the popular slow pitch technique so effective for demersals and inshore Seriolas alike, the Long Fall goes against all traditions in terms of rod design. Before anything, some background on the slow pitch style of jigging. With enthusiasts making the most of new styled jigs mainly for Madai (Pink Snapper), the advent of super slow-actioned jig rods allowed anglers to work these jigs at or near the seabed with finesse. The slow action is essential to getting the best out of these jigs, made to mimic prey on the often mucky bottom. For the usually passive Snapper it worked a treat, and a whole new culture was born.
Today the Long Fall technique takes those values and stretches the possibilities. Flutter style jigs are just as essential as the lengthy rod. Together, with the right sweeps and pitches, the effect on bottom hugging fish is explosive. Not only that, but they've found it to be as deadly for Amberjack and Yellowtail Kings as well.
The Giant Killing Long Fall offerings cover a range of weights to handle different depths and jig weights. All are seven foot eight though, and have spiral wrapped Fuji K guides ﻿that prevent a tangled mess between sweeps and falls. Because we fish greater depths and have tougher opponents, we choose the heaviest rated of the bunch. Coupled with an overhead reel spooled with PE-3 line, the PE 2-4 rated 78/5LF rod creates a perfectly balanced outfit.
With a rating to 240g jigs, the rod will handle anything below that with ease, well in the range of the usual 120-200g jigs normally used in our waters. The rods have a parabolic action following its nimble tip down to the butt. Like it's Slow Pitch cousin, this is essential for getting the best out of the jigs used. The butts though, do have plenty of grunt and do come in handy when you do hook something more substantial.
The trick of the game is to have adequate hang-time for the jig to flash and flutter. The long rod makes up-sweeps a breeze and hand movement is multiplied when transmitted through the rod. Long sweeps have the jig darting off the seabed, only to have it suspend and slowly flutter back down. This is where most takes are experienced. They can be interspersed with short pitches with quarter, half or full cranks of the reel. The video below exemplifies the techniques mentioned.
In the local context this technique has proven highly successful with bottom dwelling Snappers, Groupers and even certain pelagics. For avid saltwater anglers it is fresh approach which will open up a new can of worms. Many are already experiencing the new found effectiveness first hand. When will you?
For enquiries please email
tacklesource@live.com
Posted by tacklesource at 4:38 AM