This story was written as a field report for the DUO company website
http://duo-inc.co.jp/en/fieldreport/world/﻿

Having eagerly waited its arrival for some months now, I was glad to have some Rough Trail Aomasa pencils in my hands just before a planned offshore trip on the West Coast. It was a good chance to get them wet.

Out of the box, the finishing was impressively impeccable. The natural colours were great, and I was confident they would fool some wary fish, if not a few keen anglers. The initial concern was its weight, or the lack of it. 38 grams is a touch lighter than what we're accustomed to for the type of casting we do. But as the first casts flew, the castablity would prove a non-issue even on the stout outfits we used.

The main quarry was Giant Trevally, but in these parts they weren't really as described. Juvenile fish make up the bulk of the catch, if any at all. There for, downsizing from the traditional heavy popping gear and casting with smaller plugs would garner more strikes and make fights more interesting. We have had great success with small poppers and Hiramasa type lures in the past, so the Aomasa Pencil should fit right in.

Armed with stout 4x trebles, which added some overall casting weight, the Pencil achieved decent distance. This was essential in this hunt for these very finicky predators.

The brief for the day was to comb the reefs and dropoffs fringing an offshore island, in hope of encountering a fish or three. As the boat got into position we witnessed another vessel getting a topwater strike, landing the GT subsequently. This got everyone pumped and before long many lures hit the water.

A couple of casts was all it took to figure out the best retrieve for the Pencil. It was a very easy lure to work and responded well to various sweeps and twitches with erratic dips and darts. This was looking good for the day and the confidence was high. 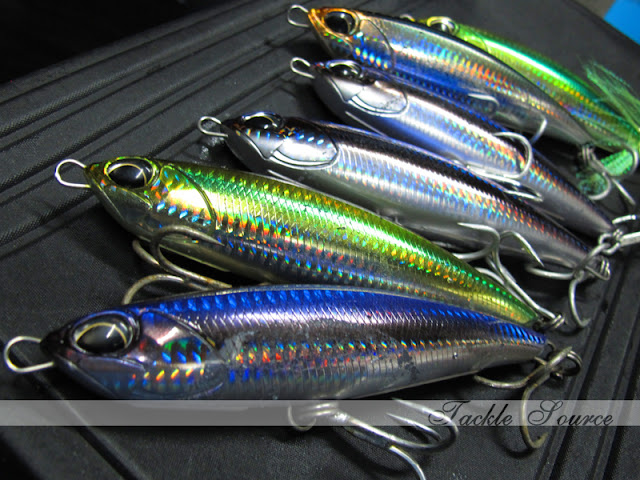 We didn't have to wait long for action, as my blue Aomasa Pencil drew a response in the form of a big take on the surface. I felt the rod load and struck instinctively, the fish reacted and raced down but it was short lived as the hooks pulled. Downer.

Back to casting and it was quite awhile before the blue Pencil was belted again, this time not with much accuracy as all that resulted was just a foamy splash. Another one had got away.

We continued pounding away, much in the hope of getting some nice shots with a victim of the new lure. The fish were on the chew, fortunately, but getting anyone to believe in the Aomasa's effectiveness without photographic evidence? Tough luck.

An hour would pass without any activity. Had they gone off the bite? A couple of hits in a day is a blessing around here, so two botched hook ups were painful to swallow. Before long, there would be a third. As the Pencil worked its slinky slide past a bommie, a flash revealed a customer but it was not to be as the GT slashed, bit, felt the hook and managed to win its freedom all within a wink as the hook failed to stay connected. Argh.

Nothing to do but to keep plugging away. The Aomasa Pencil has a great flash brought about by its strong rolling action. It certainly brings much life to the plastic creation, and when we pulled up to another corner of the island two casts were all that was needed to ellicit another strike. Elation, as the hooks stayed pinned and the rod bore the grunt of one angry fish. Within a few heartbeats the fish was boatside. With GTs one can't afford to give much line out or you risk them busting you off on the corals.

The net was readied and as the fish was slid in the deckhand swiped enthusiastically at it. The hooks caught the net and with a strong trash the fish pulled free and slid away. What does one need to do to land a fish? There couldn't have been an unluckier day. The blue Aomasa Pencil bore the scares of the multiple strikes but it still had nothing to show for it. If you believe in luck there was only one thing to do - change lure!

Out with the blue, and onto the split ring went a green hued Aomasa Pencil. This surely had to sway the game our way. Round another bend and this time the lure was sent towards a large rock face. With the foaming water fronting it, the place looked like the ultimate ambush point for any smart predator. The Pencil landed centimetres from the rock and with slack taken up, the walk, dip and flash commenced with subtle sweeps of the rod. Three cranks in and the water erupted with the strike of an angry fish. Textbook load and strike was followed by some hefty heaving and pumping, as everything fell in place and the fish slid into the net with little fuss. 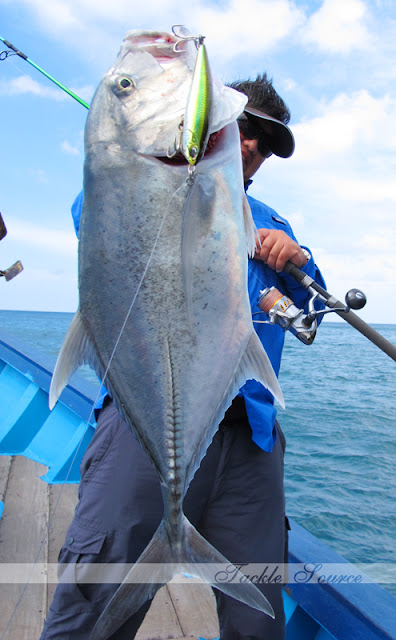 Alas a GT on the Aomasa Pencil. Not the biggest of specimens but we were more than happy to break the duck. A few quick pics and it was sent on its way. It was more a relief than anything, and with that GT on the score card we had confidence restored for the rest of the session. Sometimes all it takes is a simple change for a change in fortunes!

I am a stubborn non-believer, so next morning the first lure I put on was the unlucky blue Aomasa Pencil. It was a quieter day and the lack of surface activity was unmotivating, but the little blue soldier broke the odds as its wild shimmeys found a taker. The fish came up but hesitated, then followed the lure a good distance before the mad twitches gave him no choice but to hammer the living daylights out of it. He just had to have it. It was a full-on visual experience and hugely gratifying. It was the only GT for the day and the blue Aomasa Pencil had made THE difference. 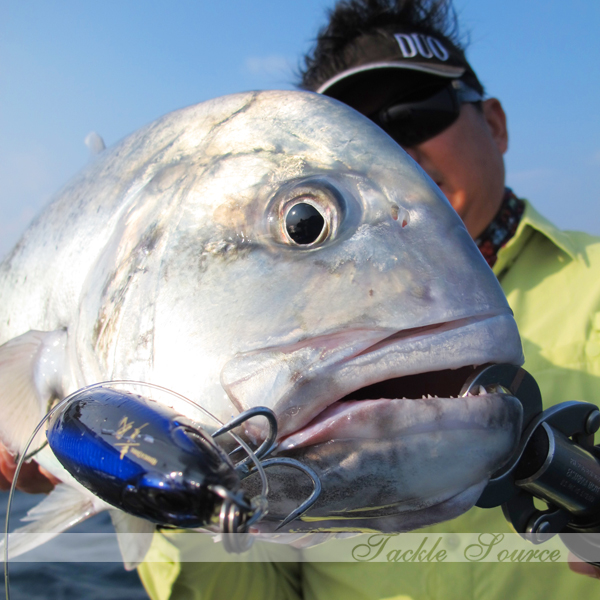 The new lure had exceeded expectations on all accords, it was worth the wait and will be one for the tackle box on all trips. All I can wish for now is a Sinking version to complement this already successful Floating one. It isn't the first time I am pushing for it, and it won't be my last. DUO, give us one please!
For enquiries please email
tacklesource@live.com
Posted by tacklesource at 8:22 PM