ONE FINE FISH : BONEFISH ON IKAKKO

This story was written as a field report for the DUO company website
http://duo-inc.co.jp/en/fieldreport/world/﻿

ONE FINE FISH : BONEFISH ON IKAKKO


The Maldives is the great escape for sport anglers in our region. I love it for its beauty, diversity of species and most ultimately for the light tackle shore fishing. It is usually a short break from the typical heavy game we go for, going after GTs and other reef bullies. But more often than not, it represents the highlight of the trip for many who've experienced it.

It is not about size, it is not about the fight. It is about the variety of captures, the visual aspect of the hunt, and the beauty of having sand between your toes as you wade the shallows. For many, the pinnacle of this type of fishing is scoring the elusive Bonefish. Bones, as often termed, are the 'ghosts of the flats'. They are finicky feeders, spook at the slightest shadow, and are camoflaged against the sandy bottom by their subdued hues. While plentiful in numerous tropical locales throughout the Pacific, they are not as prolific in the Maldives. Most are by catches when going after other species, and are more a chance encounter than a viable target. So it was time to get lucky.

Three days into our trip, with high seas and tough fishing conditions, we decided to take a break this morning and have some fun on the flats. With the help of the small tender we made it to shore from the large vessel we lived aboard. Armed with a small tackle bag and an ultralight spin rod, the emphasis was on mobility. We would have to cover much ground on foot, on sand and in water, and maybe even over broken reef.

It is very easy to be distracted by the myriad of reef bommies and structures that line the vast expanse of the island. These systems are home to hundreds of species that will snatch a passing lure with zero hesitation. My focus was on the larger predators that cruise the shallow flats and reef edges. Patience was key, and there would be more walking than casting. But the chance to spot and cast to a passing Bluefin or Banded Trevally, GT, Triggerfish, or the odd Bonefish was a challenge too hard to pass on. 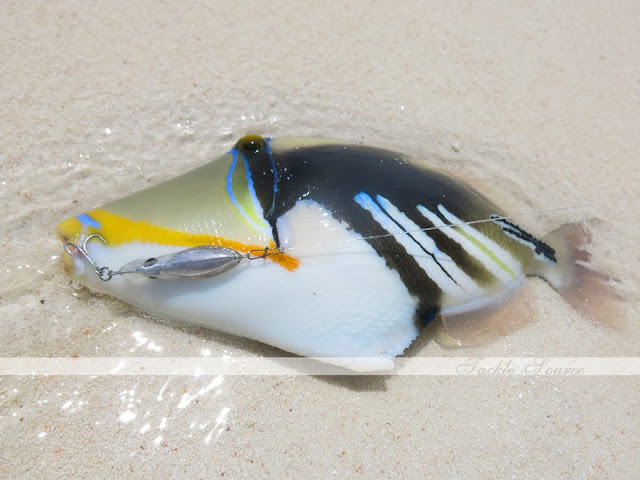 In the reefs the Tetraworks Poco Poco or Yurameki is king, but on the barren flats nothing beats the lithe Ikakko. Earlier blog readers would know of my intense affection for this lure, and it is no wonder. I don't bother with much else.

On this day the winds were up and the conditions were far from ideal. The rippled surface meant sight casting was only for the most eagle-eyed. Tough was the word of the day. We only had a couple of hours to find our fish so I found the likeliest hole to start casting into. Wading out into waist deep water to get maximum distance, I noticed a school of Mullet swimming to the right behind me. Large Sea Mullets aren't lure candidates but often on these flats, Bones would feed beneath these schools picking up prey ruffled up by these grazing fish.

Against the howling wind I was just able to plant a cast within a few metres ahead of the approaching school. Did I mention about the castibility of the Ikakko on the light gear? 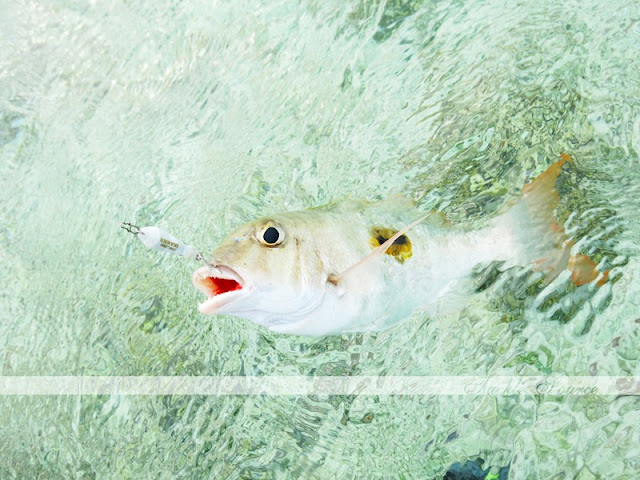 Allowed to sink for a second a few twitches was all it took as the school moved above the sitting lure. The take was positive and I struck to set the trebles. The fish felt it go in and took off, line peeled off the spool and I was in ecstasy. Rod high and pressure applied, the fished upped a gear and increased tailbeats. In a split second it was over.

Reeling back the lure in haste, a quick check revealed opened trebles. Though they'd been upgraded, the fish won this fight. With the school having spooked and fled, it was back to concentrating on that nice looking hole with the hope of chancing upon another pod. It looked bleak but you just had to ply on. On many occasions all you had was one chance before the tide drew the fish away.

Casting into the wind and into the unknown, it was tough keeping positive as the churned up water and harsh surface condition spoiled any chance of visibly spotting any activity. A repeated fan pattern to cover the area was the only thing to do. There was always enthusiastic juvenile Trevallies and such to keep anglers busy, but on the next bite the initial run after the hook-set told a diffent story. It was a steady sustained effort at decent speed. This was no juvenile Trevally.

Drag knob eased to avoid another disappointment, the fish took advantage and continued on towards some rocky reefs. It took maximum rod pressure to break its effort and soon it was all under control. A few smaller runs and soon I had it beaten. It was the Bone we've been after. 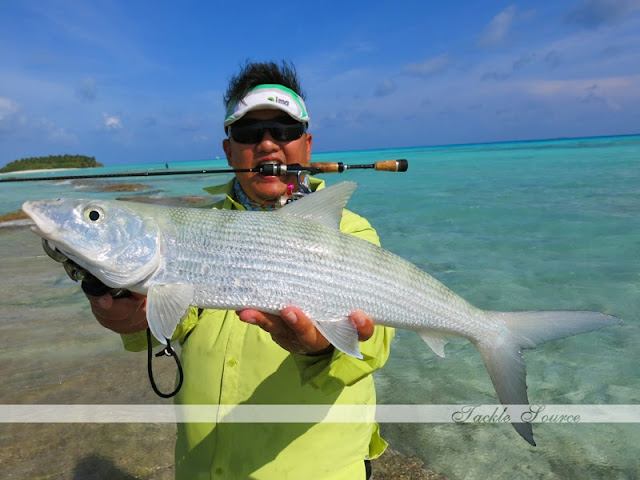 The Ikakko was taken deep, as often so. Feeding in a school, competition is stiff so prey are often taken with little hesitation. The feeling of relief is joy indeed. Having to deal with the odds and the conditions only made it sweeter. Watching it swim away from shivering hands in a slow confident manner, you know you've experienced a magical day on the flats. 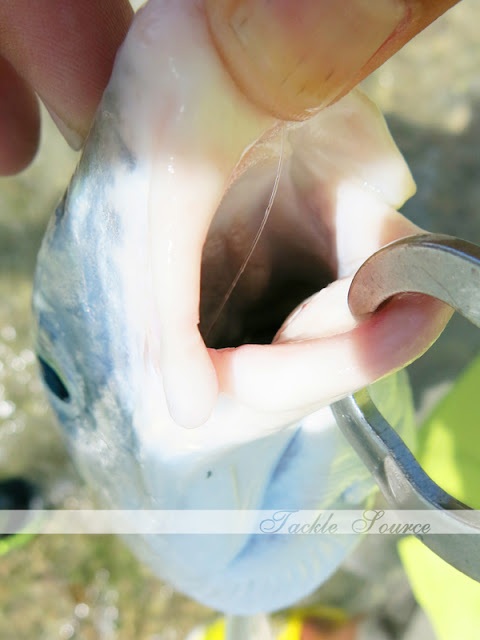 The hunt in fishing comprises of finding the fish, dealing with the conditions, knowing the terrain, using the right gear and of course choosing the right lure for the right fish. On this hunt though, that was sorted with the Ikakko. Nothing else comes close in terms of effectiveness and usability for this type of fishing. That's one simple choice.


For enquiries please email
tacklesource@live.com﻿
Posted by tacklesource at 12:12 AM