This story was written as a field report for the DUO company website
http://duo-inc.co.jp/en/fieldreport/world/

ONE FINE FISH : JUNGLE BASSIN’
Living in a concrete jungle, we are always looking for getaways no matter how brief. And there’s no better feeling than trekking off the beaten path and experiencing the solidarity of the dense rainforest. If there’s some good fishing thrown in then we get more than bargained for.
Down our local impoundments the regular quarry include the ferocious Giant Snakehead and other indigenous species, but of late the introduction of the prolific Peacock Bass means you’re more likely to catch one than not. Now this transplanted specie has developed a whole following, with many sport anglers pitting their skills against these Amazonian migrants.
In more recent times there has been another phenomenon that has spawned from these introductions – cross breeding. There were recent reports of anglers landing unusual looking specimens and upon closer inspection were found to be hybrids indeed. These are generally a spawn between the larger cichla temensis and the smaller ‘butterfly’ strains. The results have been pretty stunning, with unusual looking fish to say the least.
We were keen to get in on the action of course and so it was without much persuasion that we found ourselves in the thick of it early one morning. Armed with a spin stick each, the emphasis on being mobile, we took a leisurely stroll into the lush greenery of a secondary forest in search for likely spots that will produce these said Bass.
It didn’t take too long before we chanced upon a nice clearing, as a bonus there was a little fallen tree on the opposite bank just within a good cast. No invitation required, I quickly clipped on a lure that would cast clean and well. That lure would be the Bay Ruf S-80, designed for the salt but at home in the fresh all the same. A few test casts on either side of the snag drew no response, but it was just too nice to give up on. We were pretty sure there’d be a nice Bass or two laying in ambush somewhere in there.
With greater confidence I placed another cast deeper under the overhanging foliage, followed by yet another deeper in the cover. The splashing would’ve got the attention of any fish no matter how deep in the snag. Upon impact a fast crank of the handle would bring the lure down to depth, where a pause and twitch would keep the lure in the zone and not exit the snag prematurely before drawing attention to itself.
On what must have been the fourth cast at the exact spot the lure was belted hard upon descent courtesy of that first fast crank. A quick hook-set and frantic cranks won us a few crucial feet of line but the fish was hell-bent on making it back inside. And it felt like a good one.
Fights like these are won or lost in a matter of seconds. Luckily, this time we won as the big Bass tried unsuccessfully on a couple of strong lunges to get home. Once clear of structure it was a matter of keeping it calm and bowing the stick as it leapt clear of the water in attempts to throw the lure. After what felt like an eternity, the fish was finally ready to be landed. 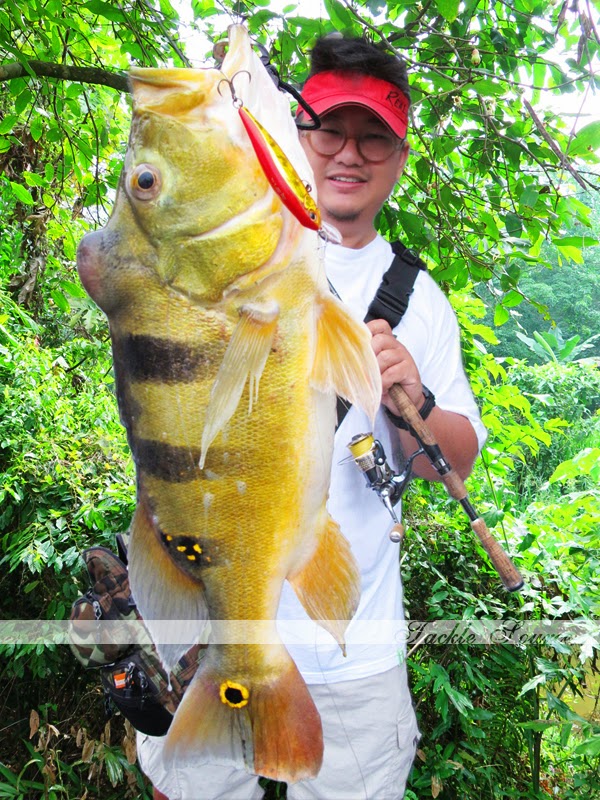 It was a hybrid Peacock Bass indeed. The fish displayed the muscular flanks of the larger specie but was also somewhat stocky like that of the smaller parent. Regardless, it was a prime specimen of a male in brooding mode sporting a large hump head. It was quickly released after a few quick pictures. We continued casting but it seemed like the snag would only produce one fish.
We then trekked deeper into the forest in search of more of these exciting fish to catch. Our next encounter would take place round the next bend where shallow grass beds would give way to a steeper gradient drop just within casting range. Again, a long-casting lure was called into service. But now this one had to plunge deep. Another Bay Ruf stablemate would be the answer – the V-75. This lure is a personal favourite of mine, and is as versatile as they come.
The spin outfit coupled with the heavy lure produced fantastic distance. Let to sink, the lipless crankbait is then ripped back in aggressive fashion with sporadic pauses. Traditionally, Peacock Bass just go wild for this, and on this day it would be no different. First retrieve and the Bay Ruf was stopped dead in its tracks on its way back. This fish held deep and felt heavy. Another good fish. Like the one before, much care was given throughout the fight to ensure the fish made it to the shore. This one was a less complicated affair as the fish cooperated and soon we had it prepped for a few nice shots before it was sent back on its merry way. It was a good way to start the day. And after a few smaller fish we headed back into civilisation, happier than when we started.
For enquiries please email
tacklesource@live.com﻿
Posted by tacklesource at 11:18 PM